Fantasy Prints would like to congratulate Darcy Graham in becoming Live Borders Sports Personality of the Year 2019. Fantasy Prints was delighted to sponsor this years award.

Graham has just been featured in an article on the Rugby World Cup Website.

GRAHAM ENJOYING THE HIGHS BUT KEEPING FEET ON GROUND

Scotland’s young winger is winning caps, awards, and praise aplenty but he still has to do the ironing and other chores for his senior team-mates.

KOBE, 4 Oct – Darcy Graham may have taken to international rugby like a duck to water but the youngest member of Scotland’s Rugby World Cup 2019 squad is being kept grounded.

“I’ve had to iron the boys’ shirts,” said the 22-year-old. “I had to iron four or five before the opening ceremony.”

The Edinburgh winger also has to carry the team’s guitar around for the likes of team-mate Sean Maitland, the best strummer in the squad.

“And Spacey (Duncan Taylor) loves it, too,” he said.

The latest in a long line of internationals to hail from the Scottish Borders town of Hawick, he has had some week to remember. After playing his first Rugby World Cup match as a replacement against Ireland, he then started in the 34-0 victory against Samoa on Monday.

Then on Wednesday, he discovered he had been voted the Scottish Borders personality of the year.

Our final award of the night, also chosen by the public goes to…@Darcy_Graham, he picks up the ‘Sports Personality of the Year’ award 2019 sponsored by Fantasy Prints 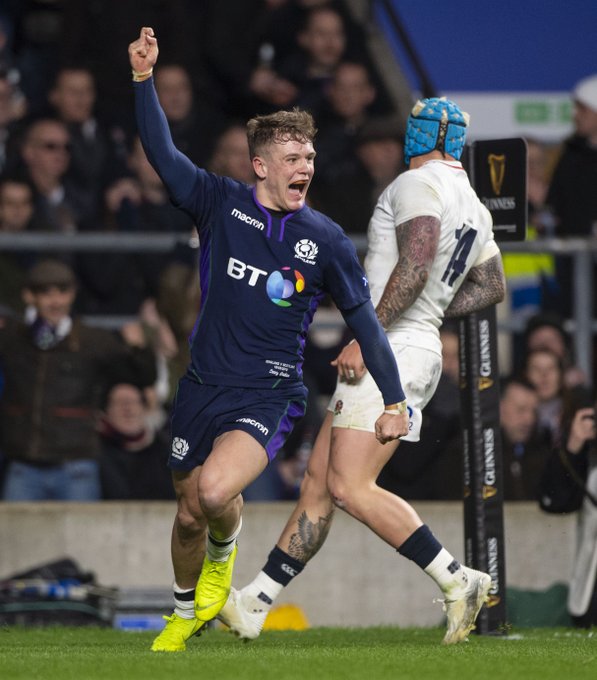 “It was a nice thing to wake up to. I had no idea I had won until my mum sent me a text. My parents had to go and collect the award, so they certainly enjoyed their night.”

Graham slept for most of his day off, having struggled to get much sleep following Monday’s game.

“I think I was awake until about 4.30am on the Tuesday. That’s always the case after games. You have a few coffees and you’re replaying the game – it takes a lot to shut off.”

Graham, who has scored five tries in his nine caps since making his debut against Wales in November 2018, does not, however, lose sleep before games.

“I am the kind of guy who takes things in his stride. I wanted to enjoy the occasion. There was pressure on, of course there was, but honestly, I was chilled. I just wanted to get into it. Nothing ever gets to me. That’s the way I am, the way I have been brought up.”

For all his abundant energy and excitement, he still takes some pleasing.

“I wasn’t too pleased with my own individual performance. I made a couple of mistakes; I dropped one ball, I had a try-scoring opportunity off one scrum. They weren’t major but I was unhappy nevertheless and they ate away at me after the game.

“I expected better of myself. I put a lot of pressure on myself to be perfect in every game I play. You don’t get games like that, I guess, but that’s just how I am.

“I am very hard on myself, I get annoyed because I want to be the best player I can be.”

If you are a sign company, printer, graphic designer, marketing company or a large customer who would be interested in buying from us regularly and repeatedly you can setup a Trade Account
Apply for a Trade Account

The more you buy the more you will save with Fantasy Prints. We offer amazing discounts based on the size or quantity of your order. Also if you order regular we can offer special rates.
More info about Large Order Discounts

Want more information?
Can't find what you are looking for?

We can call you to discuss your requirements or contact you by email.